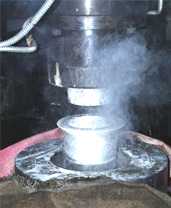 We are a leading forging company consistently delivering quality forged products since 1989. Our forging services incorporate modern equipment, skillfully engineered processes, and quality raw materials. Let's have a look at the details of a forging process. Forging is the process by which metal is heated and is shaped by plastic deformation by suitably applying compressive force. Usually the compressive force is in the form of hammer blows using a power hammer or a press.

Forging refines the grain structure and improves physical properties of the metal. With proper design, the grain flow can be oriented in the direction of principal stresses encountered in actual use. Grain flow is the direction of the pattern that the crystals take during plastic deformation. Physical properties (such as strength, ductility and toughness) are much better in a forging than in the base metal, which has, crystals randomly oriented. 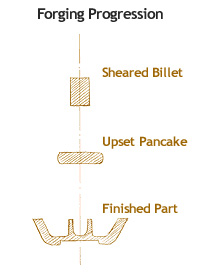 Forgings are consistent from piece to piece, without any of the porosity, voids, inclusions and other defects. Thus, finishing operations such as machining do not expose voids, because there aren't any. Also coating operations such as plating or painting are straightforward due to a good surface, which needs very little preparation.

Forgings yield parts that have high strength to weight ratio-thus are often used in the design of aircraft frame members.

A Forged metal can result in the following 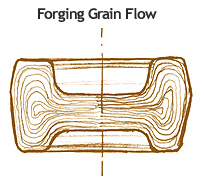 The metal can be forged hot (above recrystallization temperatures) or cold.

Open Die Forgings / Hand Forgings:
Open die forgings or hand forgings are made with repeated blows in an open die, where the operator manipulates the workpiece in the die. The finished product is a rough approximation of the die. This is what a traditional blacksmith does, and is an old manufacturing process.

A proper lubricant is necessary for making good forgings. The lubricant is useful in preventing sticking of the workpiece to the die, and also acts as a thermal insulator to help reduce die wear.

Press Forgings:
Press forging use a slow squeezing action of a press, to transfer a great amount of compressive force to the workpiece. Unlike an open-die forging where multiple blows transfer the compressive energy to the outside of the product, press forging transfers the force uniformly to the bulk of the material. This results in uniform material properties and is necessary for large weight forgings. Parts made with this process can be quite large as much as 125 kg (260 lb) and 3m (10 feet) long.

Upset Forgings: Upset forging increases cross-section by compressing the length, this is used in making heads on bolts and fasteners, valves and other similar parts.

Roll Forgings:
In roll forging, a bar stock, round or flat is placed between die rollers which reduces the cross-section and increases the length to form parts such as axles, leaf springs etc. This is essentially a form of draw forging.

Swaging:
Swaging a tube or rod is forced inside a die and the diameter is reduced as the cylindrical object is fed. The die hammers the diameter and causes the metal to flow inward causing the outer diameter of the tube or the rod to take the shape of the die.

Net Shape / Near-Net Shape Forging:
In net shape or near-net shape forging, forging results in wastage of material in the form of material flash and subsequent machining operations. This wastage can be as high as 70 % for gear blanks, and even 90+ % in the case of aircraft structural parts. Net-shape and near-net-shape processes minimize the waste by making precision dies, producing parts with very little draft angle (less than 1º). These types of processes often eliminate or reduce machining. The processes are quite expensive in terms of tooling and the capital expenditure required. Thus, these processes can be only justified for current processes that are very wasteful where the material savings will pay for the significant increase in tooling costs.

Please send us your queries or requirements on: